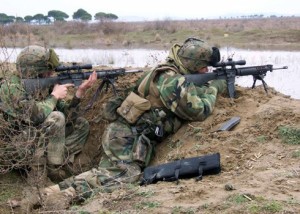 Misfit follows up with more excellent information and detail on the Squad Designated Marksman (SDM). I was disappointed at some of the response to his previous guest post ‘Long Range Shooters‘, because it seems some are determined to take it down the caliber debate rabbit hole. Let me be clear on that: It’s OK to discuss the relationship of caliber to long range shooting, and how you may want to equip your squad with a certain caliber. However, statements along the lines that the 5.56 doesn’t work will, from now on, just be moderated out in the interest of getting to the nub of the point here.

The point here is to learn, discuss and implement the important concept of adding a longer range shooting capability to your team.

Let’s not lose sight of some important points:

1)  Inter-operability of weapons and ammo within your squad.

2) The need to multi-purpose even the SDM.

3) The need for the SDM to also be able to engage in close combat, ‘fighting through,’ should that be the case.

The Squad Designated Marksman(SDM). Rifle should be of a standard caliber common within the squad. I’m not advocating any specific caliber since I don’t know what everybody’s load out is. The 5.56 naysayers can go back to the last 10 years the US has been engaged overseas and see that it does work within the capabilities defined earlier. At 600m a match grade 5.56 round will do the job and even beyond. Shot placement is the final say. If I was shot in the foot with a .50 cal I would more than likely survive. I like the heavier 7.62 also but some of the draw backs are that you have more drop and less danger space so your dope has to be more precise and ammo is heavier bullet for bullet, ounces equal pounds/pounds equal pain. Also not having the ability to spread load ammo after contact is a problem. Your only getting maybe an extra 200m out of a SDMR in 7.62. You might run all soviet block weapons and have a SVD or Tabuk. I don’t know your situation, it just comes down to logistics in the end.

For the rifle I would run a 18″-20″ 5.56 AR with a scope that runs from 1-10(1-6X,1-8, 2-7X,  3-10X are some examples) power possibly with offset back up iron sights or small red dot. The reticule should be a BDC or mil dot with the ability to rapidly adjust the turrets. I would also recommend looking into a Horus H59 or Tremor (1 or 2) reticule. Once you understand these reticules you will be able to self-correct based off of your impacts and will reduce the amount of time messing with turrets. The Tremor also increases the SDM’s ability to adjust for wind quickly. As a SDM field of view is critical since you are still part of the patrol and contact at close range is very possible. The wider field of view will allow the shooter to pick up targets across at least a squad size front much faster than on 20X. For ammo I would run a minimum of 60 rounds of 77gr match ammo with another 60 of what is common in the squad. That way the SDM isn’t blowing through his match ammo on chance contact with the enemy. This being said he should patrol on a 300m BZO until in position to transfer to his match ammo.

The SDM will also need the ability to range his target fast and accurately. This could be with a pocket laser range finder (PLRF) or his ability to range estimate with his reticule. This will allow him to make quick accurate adjustments for precision fire and build situational awareness for the squad leader. I would also recommend a pair of small binos of at least 7X preferably 10X. A set of sturdy bipods are also a must have. If possible the SDM should have NVG or FLIR capability and some form of IR laser since he will more than likely be placed in an advantageous position to identify the enemy for the squad he is supporting. If you can get an in line nigh sight all the better. I would also advocate for the SDM to be suppressed if possible. This gives him the advantage of possibly delaying the enemy from his position for multiple shots while the rest of the squad elements maneuver. He should not be patrolling with the suppressor on but have it as a tool to be used when necessary loud noises scare people. I would also add a hand held ballistic computer and weather station from Kestrel with Horus or Applied Ballistics. They cost a little but pay for themselves over time in the amount of ammo you save during data collection. It also allows the shooter SDM to have his dope for multiple types of ammo and automatically adjusts for atmospherics.

The SDM is a concept that needs to be hashed out within your specific group. It can be just one guy in the squad tasked and emplaced in the best fire team to allow him to do his job when necessary. It can also be used as a crew served weapon employed in pairs if you do not have automatic weapons at your disposal. This would mean two rifles with an observer controlling their actions and giving them solid corrections and directing them onto priority targets. Having precision fire on the objective allows the squad to maneuver under fire much closer than with automatic fire. It can also be used once the automatic riflemen have been shut off and gives them the necessary time to displace while being covered by fire. The SDM is a capability that is only limited by training and imagination. That being said the SDM still has limitations since it is a member of the squad and operates within the scope of the squad’s capability and under the leadership of the squad leader. One last thing to add is that he should always be at a distance to mutually support his elements. What distance is that? My rule of thumb is half the distance of the weapon system. This gives the supporting element in a perfect scenario 300m of maneuver forward or back until the SDM can no longer effect the enemy. If you get pinned down at 700m from his position and the enemy over runs your position he isn’t doing you any good. You have to have time and space to move and that’s preferably done under fire.

Ok, great stuff. Some commentary, applying this back to some of what I have talked about the squad and the assault cycle:

The Squad – Size and Organization

More on The Squad & the Assault Cycle

I often use the 8 or 9 man squad as a training tool, and advocate for the ideal use of a 12 or 13 man squad, which is really a half platoon, a big squad, but ideal. The reason for the odd number is that the squads are made up of multiples of 4 man fire teams. If you have the numbers, you can put the squad leader outside of that organization in order to allow him to place himself free of a specific fire team, with the main effort.

With my fire teams, I usually advocate for them to be identical. I do this because it allows for inter-operability and also accounts for the uncertainty of which element will end up in contact. The disadvantage with a specialty team is that, if for example, it is not equipped for close combat, but is ambushed and finds itself in it, then it is not in its intended role/position to be able to perform an overwatch role, and is in the thick of it. This is particularly relevant when  employing the three team satellite patrolling method.

This is why it is ideal to have a SDM in each team. Really, what you actually want is an overall high level of marksmanship in your squad, but failing that you will have individuals who are better and more ‘trusted’. Those that talk about how all their guys are in effect DM’s and can all shoot out to ‘X’ distance often fail to take account of the difficulties and stresses of combat. In effect, its often armchair tactics, based on a low stress environment on a target range. PT/maneuver capability anyone?

When we do our bunker drills on CRCD/Combat Patrol I talk about the fire base coordinating fire, and switching fire, with one designated marksman (who can be simply a good shot!) tasked to ‘fire in’ the grenadier as he crawls up to the flank of the bunker. Rounds are put through the bunker opening until the grenade goes in. (Note, this does not actually happen, for safety, but is simulated against a ‘switch fire’ target to the flank).

If you have an 8/9 man squad, and want to add an SDM pair, then this is, as per the article, like adding a ‘gun group’. It gives you a suppression capability, by precision fire rather than volume and weight. This SDM ‘gun group’ if you like, can be kept with the squad leader and then deployed out into overwatch or fire support as needed.

Ideally, with access to weapon systems, you would have each team consist of: team leader, SDM, grenadier (203) and SAW gunner. That gives you some firepower options to really rain down the hate on the enemy, allowing you to maneuver to either assault or break contact. . Failing that, work on the precision fires and shooting skills of your teams, and try to add an SDM to each one.

There are so many options, and you need to deploy them as per your task organization, mission and circumstances. If you have the three team 13 man squad, then ideally you have SDMs in each team. Or, you have a single specialist team, with perhaps two SDM’s, protected by the other two guys when they move to an overwatch or fire support position. You can split such a team into two pairs, each with an SDM, and have them perform a task. Just remember, that if this team unintentionally finds itself in close contact, the weapons they have must be capable of close range firefights. Prima donnas with match standard bolt action rifles are  not going to cut it. If your team is equipped with 5.56 rifles, then have the SDMs equipped with slightly better, longer range capable versions, with the required optics.

It is important to remember that this is not really about shooting capability. It’s about a team’s overall combat capability, utilizing the ability to shoot accurately to range as part of your combat power as a force  multiplier. This is  not sniping, this is not a range or caliber fetish. It’s not lone wolf stuff. It’s the squad in combat.