As I sometimes do, I am going to expand on two comments posted on: ‘The Ingredients for your Victory: Tactics + Gear.’
First one:
“And how do you think the actual resistance fighters will feel about the fat-asses holed up in their bunkers, not doing any of the heavy lifting? Maybe they will do some redistribution of their own….”
And now your my enemy as much as the Regime. I thought you guys were about freedom, guess not.
And then I think the same guy comes back to my response with:

This one illustrates a fundamental mindset problem and a misunderstanding. In fact, having inserted the statement in the original body of the post,  I was waiting for a bite. Thanks for obliging.
The thing is this: as a supporter of Liberty I have no intent to infringe on yours. Come  SHTF, it is up to you what you do. A fundamental duty is implied in the task of prepping to protect your family and try to survive through to the other side. That is the basic start state – family protection – before you can think about active resistance. But here is is: you can be a ‘prepper’ just worried about surviving, or you can additionally be concerned about Liberty and Tyranny. If you are the second type of Liberty minded prepper, then don’t whine about the potential of people stealing your shit if you are not actually prepared to do something about tyranny. That goes back to my comments about the selfish fat-ass prepper hoping to hunker down and wait it out – fine, but who is going to do the heavy lifting of fighting tyranny for you? Are you in fact, a Free Shit Army supporter masquerading as a prepper? You want it handed out to you?
The thing is, in SHTF, Liberty is not going to win by default. There needs to be a Resistance. Some are training and prepared to put it on the line to win back that Liberty:
“The point is that, for many of us, it is not about simply holing up and surviving, it is about going out and fighting to WIN. To defeat the bad guys. Granted, if you engage in combat there is a chance you will be wounded or killed. Most of us are willing to put it on the line because we believe in Liberty, we believe in Freedom, and we will not be oppressed; we will not kneel to tyranny. That is why we train, plan and apply tactics in order to increase our chances of success and mitigate the dangers as much as we can, while having an effect on the enemy.”
Those guys are the fighters, making up tactical resistance teams. If you read my post (I mean actually read it, and comprehend it, not just look for stuff to whine about) then you will see that the idea is that they also have to be self-sufficient, as preppers as well as fighters, and protect their families. But after months and years of fighting, who knows what will happen? The clear implication is that they will be fighting, and thus be potentially wounded, dead or at the very least having less time to tend the vegetable garden.
This is where we introduce those who are either unable or unwilling to actually fight. These are the guys that the active fighters are putting it on the line for, to fight for YOUR Freedom, your Liberty – to fight for your right to be a fat-ass and sit among your piles of dehydrated food in your bunker.
So if you are serious about Freedom, don’t expect to sit pretty filling your fat face while others fight on your behalf. However, if you are physically or mentally not up to the task of active combat, there is a role for you. So, quit whining and get on with it. “Woe is me, I was worried about tyrannical government stealing my food, now Max says the Resistance is going to steal it too. Woe is me, I may actually lose a few pounds…”)
The way you help is in the network, commonly called the auxiliary. You help out in other ways. If you have a prepper farm, you can produce food and donate a portion it to the fighters. You can move information around, conduct covert recce while driving into town, whatever.
The point is, you can whine about infringements on your ‘freedom’ or you can actually do something about it, within the limitations of your physical or mental state. For me, I don’t equate ‘freedom’ with the right to be a selfish fat-ass, but I do respect your right to disagree with me and continue to be a selfish fat-ass. But if I have been fighting the Regime for three years and my family is starving, I many knock on your door and ask for a charity handout of Mountain House. If you turn me away, I may give you a few choice words. Don’t tell me: you will set your killer bees on me, or shoot me down at 1000 yards from your ridge….you long range killer bee sniper you.
Bottom line, if people are serious about fighting tyranny and getting back to a free Republic, they have to be prepared to be less selfish, less exceptionally selfish, and sacrifice a little for the cause of freedom. Its called being a team.
For an example of all this, read ‘Patriot Dawn: The Resistance Rises‘ – it’s a funny old thing, but you may even think that I wrote it for this purpose…? 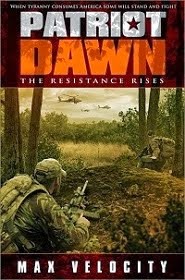 Respectfully, this is bordering on ridiculous.

Sixteen (16) magazines and 480 rounds of ammo itself is about 18 pounds. Another 9 pounds for your AR rifle with optics. Add on canteens, water, food, compass, NVGs, pack, etc. and your “patrol” is going to be tits up on the ground gasping for a medic. Few of your readers are capable of carrying anything close to the weights that you are suggesting.

Why do I say that?

Here is a video with a few of your typical readers…

Because the local Piggly Wiggly will be closed for good.

When it comes to patrols (if necessary) the use of vehicles, ATVs, horses, bicycles, even pack animals make more sense.
Max Velocity October 2, 2013 at 2:50 AM

You, Sir, have clearly not been listening (‘Respectfully’ LOL). How to answer this in minimum words? Read the blog, read my books.
1. No-one ever said it was going to be easy. Infantry work takes effort and fitness.
2. PT
3. I have not had time to look at the video in full, but the bottom line is that these guys are training, which is likely more than you are doing – so it is not the critic that counts, but the man in the ring with blood on his face.
4. 7/11 Closed? No shit sherlock, it’s fucking SHTF. Isn’t that the point?
5. If you read the blog you would see how much I bang on about tactical mobility and options in that realm.
6. PT
7. Yes calories will be limited, that’s why we plan for SHTF and have a team (families etc) at the retreat. You can still carry your infantry fighting gear if 7/11 is closed – just look at history.

Oh no, Sheetz is closed and I can’t order my fat burger on the touch screen computer, so all my SHTF planing is out the window. Fuck, who would have thought it, right….?

You sir, need to grasp your balls, to check if they are still there, then do some push ups and pack a fighting load.

OK: that speaks for itself. Now I must spend less time blogging and more time concentrating on writing the sequel to Patriot Dawn.
Live Hard, Die Free.
MV