Enfilade: by a USMC Machine-Gunner, Vietnam 68-69

Ron Sends:
Max, I have tried to illustrate the concept of enfilade fire the way I understand it…and utilizing your concept of a trench line to help explain it. The illustration is attached.
It seems to me that enfilade fire is tied to the idea of trying to have the largest target mass in front of your weapon as possible. It doesn’t matter which way the targets are facing…think trench…the troops may be facing outward and you can shoot along the trench line into their “flank”.  But suppose they do a right face and come charging at you. In that case, you are still shooting along the trench line into the flank of a line of troops, they just happen to be facing you instead of looking outward.
Just as long as the bullets can be laid on – and through – as many multiple targets as possible with the least amount of weapon movement, we are in enfilade fire. Only multiple targets can generate an enfilade firing situation. A single target in front of your weapon, even if you are on its flank, does not constitute enfilade firing. Once again, it does not matter which way the multiple targets are facing or moving, only their overall alignment.
See what you think of my illustration and use it if you think it might help.
Ron F
Corporal  USMC
Infantry Machine Gunner
Vietnam Aug’68 – Aug’69 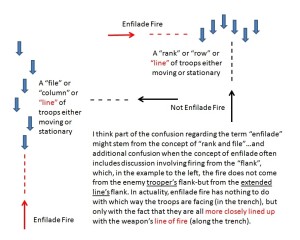 Ron is correct: it is not so much what direction the enemy are facing that is important for enfilade, but that you are engaging the enemy formation along their longest axis. In most situations, this does involve moving to a flank, which most often means ‘enfilading’ them from a flank. However, in the illustration above, if engaging an enemy column, you would have the formation in enfilade if you were shooting along the length of the column, even if they were facing you, or moving away. This is a technique that can be used in ambush, if you use a bend in the trail/route in order to shoot along the trail, rather than straight at it from the side. Thus, in an ambush, site your machine guns to the flanks of the ambush, preferably on some sort of bend, in order to shoot along the trail rather than right at it.
That concept is illustrated in this diagram, by chance, from my original enfilade/defilade post:

Where I may be guilty of sowing confusion, is with the anti-armor example. Here we have the added factor of the tank armor, which you want to hit from a flank/rear. Thus, when setting up anti-armor positions, you want them sited in defilade, to hit the enemy with ‘enfilade’ fire – which in this case, you mean hitting the side of the enemy vehicles, even though they may be in column and you may not be aiming at the longest side of the formation, but rather the column from the side. That is a question of priority, and siting in order to achieve defilade.

In the context of the hasty attack planning exercise, if we assume the enemy is on line fighting us from the hill top, once we send an element to the flank, either left or right, and they are now at right angles to our fire support base, they will be able to shoot at the enemy in enfilade. They have got to the flank and are now shooting along the line of the enemy, who are still facing our fire support element. This is also why enfilade is synonymous with getting to a flank. However, a strict definition is to shoot along the longest axis of the enemy formation, whichever way they are facing.