I have been working on a second edition of ‘Contact: A Tactical Manual for Post Collapse Survival‘. It will include a smart looking new cover by Tony Mauro, who did the cover for Patriot Dawn as  well as a couple of Rawles’ books.
Here is the current book: 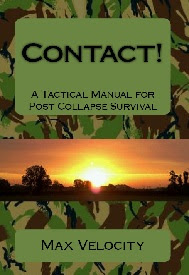 Before I finalize the updated manuscript, I would like to get some constructive feedback from those who already have a copy and have read Contact.
I have expanded the book by approximately 200 pages. I have done that by doing the following:
1) Expanding some of the detail, in terms of description, details and diagrams, for TTPs such as contact drills. My reasoning here is that when I originally wrote the book, it was a general manual. Since then, I have been training people at my site and I have seen what is useful and what is not, and what needed more detail in the book. I have evolved as a trainer. For example, the new version includes a blow by blow of the drills that I teach on my CRCD class, so you can replicate them if you either did not attend, or wish to refresh your memory when training others some time after a class.
2) I have peppered the book with some of my better and more informative blog posts edited a little and placed in the book where they best shed more light on the subject at hand. I have decided to keep them separate as individual blog essays rather than try and merge them into the text, because the blog posts tend to have their own flavor. It is manly this style that I wanted feedback on; some of the more recent copies of Contact already had the update with some blog posts added,  and I want to see how people feel about that style?
The blog posts bring in a more informal flavor and an alternative to the straight-up text of the manual.
As the manual evolves to the second edition, it still includes all the original basics on prepping and family defense, but it has undoubtedly taken on a slant towards Resistance operations, to back up the novel ‘Patriot Dawn: The Resistance Rises’. When I first wrote Contact, I was a little hesitant about the full political side/fighting tyranny etc. I have also evolved my views on that since then.
That leads me to one final question: I have included some of my blog posts such as the one on HIT teams (no knock raids – ‘The Home Invasion Dilemma‘)). The book does reach a fairly wide audience and I don’t want to scare them all off – do you feel it is a good idea to keep that sort of comment in there, or leave it out? I feel pretty strongly about the subject, so I am not sure I am being entirely objective by keeping it in there.
Now the project for the second edition of Contact is largely out of the way, I am fully engaged in writing the sequel to Patriot Dawn. Jack and his Resistance Company are rolling again. I am calling the book: ‘Patriot Rising: The Storm Rages.’ 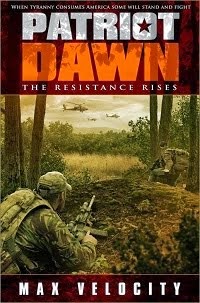