Commentary on the Prepper/Forum/Tacti-cool problem 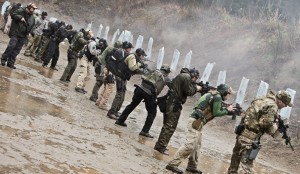 Above: this is not tactical training. This is square ranges, beyond which you need to move to field firing.

I recently wrote my post ‘Taking Down the Tacticool Transition Dogma‘. Those of you who have read it will know that it involved an excursion into the world of the ‘preparedsociety’ forum.

When I first wrote ‘Contact‘ and was getting into this game, before I had my own blog, I frequented a few forums with mixed results. It was due in large part to a lot of effort blogging on forums that I initially got the word out about ‘Contact‘. One of the forums that I found fairly decent was ‘American Preppers Network‘. Others I joined with mixed results. I remember trying out ‘lightfighter’ and finding it full of egotistical tacticool idiots, who soon shut me down when they found I was peddling something non-tacticool. These guys honestly think they are SOF members in some sort of virtual team room. There were also some of the classic tacticool numpty trainers on there as well, who soon wanted me shut down. So, Max Velocity, you don’t think we should be peddling room entry and transition drills all day, pretending it is suitable tactical training? Assholes.

So, two days ago, I made a huge mistake. I went back to APN. My thought was that I had pasted a lot of useful information there in the past, and that I had a following, and I wanted to update people about certain things like my training site and Contact II. Oh, what a mistake. I fell foul of some sort of tough guy ‘moderator’ who called me a ‘spammer’ and told me he was going to ‘deal with me’ and some such. By the way, did I mention that I am (was) actually a paid sponsor at APN, specifically to allow me to do limited advertising of my stuff, as well as all the free blog posts that I had put up there? Anyway, not one to be meek and mild, I got into it with this asshole and ended up getting banned for ‘ignorant behavior’. Following that, I wrote in and made sure they removed all trace of my personal and business information from the site and the forum, including  my paid text Ad for Contact II in the sidebar. Assholes.  I was freakin’ incandescent with rage! I’m just glad I was not located in proximity to these turd eaters.

(BTW: none of the things I wrote on the forum to do with this fight were unreasonable, threats, etc. They all bear second reading. The problem is trying to reason with egotistical maniacs with limited reading comprehension, which is a familiar problem on these forums.).

I since find out from an insider at APN that I know:

“Here is what has happened on the forum just prior to your return. HUGE fight among moderators – many were banned. A fight among members standing up for the moderators. Many members were banned. And yes, NEW rules choking opinion and honesty from posters and moderators who now think they are real bad asses. Childish drama from people once respected. It’s a small community word gets around.”

Which leads me to this post. There seem to be several problems hamstringing the ‘prepper community”:

1) The prevalence of ‘tacticool’ unsuitable and tactically unsound training practices, often promulgated and defended aggressively by LEO trainer types who guard the gates, or their acolytes. They only know what they know, they don’t know what they don’t know, and they can’t see the wood for the trees. It’s my mission in life to pull apart tacticool training practices and wake people up.

2) Forums full of ignorant assholes who are trying to control other people and are on power trips. These are the archetype of the egotistical arrogant fool. They are utterly unteachable. Unassailable egos paired with ignorance of what they don’t know is the huge elephant in the room of why any sort of ‘Patriot’ movement is dead before it starts. Look at all the bickering in the ‘community’ for examples of that. One of the things I was pointing out to the assholes at AP is that as the forum has grown, they have put these ‘moderators’ into positions and they are no better than collectivist tyrannists on power trips. They are the same as your HOA enforcer. The only difference between these guys and the tyrannists is that the ones on the prepper sites are “me, me, me” and the collectivists are “yours, yours, yours”. They are all about power over others. These forum moderator types are exactly the types who would flip to inform for the tyrannic regime in a heartbeat if it helped their ‘survival’.

3) ‘The Selfish Prepper’: as I have written before, a lot of these preppers are not actual survivalists or potential resistance fighters against tyranny. They are just selfish fat-asses collecting piles of junk and dry food. Their whole intent is to crawl away and hide while the country collapses. They will let others get out and do the heavy lifting for liberty, fighting and dying resisting the forces of domestic and/or foreign tyranny. They expect to emerge at the end, truly your meek and selfish inheriting the earth.

I wrote Contact and started tactical training classes in order to help good decent honest folk survive. I also want people to have the information needed if they have to fight tyranny, if that is the way it goes, rather than some sort of standard collapse. I get that your first priority is your own family/tribe. Mine is as well. But if I can get them to safety I will throw on my gear and muster to fight tyranny. But not if everyone else is just hiding out and not willing to participate. Then we will all die piecemeal and in our small family groups.

I’m sure that is what the tyrannists are counting on, and probably why they may even be running some of these assholes on the forums and blogs. Trolls.

Part of the problem is the selfish ‘retreat sniper’ type (sniper: yea, right!). How many will be murdered while trying to escape the fluctuating tides of a civil war or balkanization, when they walk onto the wrong property and get shot at long range for their trouble? Or, alternatively, they come across the pile of bodies on the trail below the sniper’s position and decide to go flanking through the woods to close with the murderer’s retreat. He has to sleep sometime, and tend the tomatoes, right?  This is where you get into the madness of the ‘killer bee guy’. No, the killer bee guy is not a product of my insanity, it was actually a real insane guy who commented on my blog saying he would be OK in SHTF because he has killer bees – he would just shoot the hives and they would kill any intruders. So who needs to train in tactics right? This is the sort of insanity and ignorance that we are dealing with here. You just know this guy is a 500lb asshole who is tying to justify his own laziness, and inability to get off his lazy ass, within his own denial.

So,  I wrote the books to help good honest folk, and I offer training. Many of you have a teachable attitude and are taking advantage of that. Good. So  many others are beyond help. You will find them out there on these forums. When I come across one, I just have a mental image of a guy with ignorant stupid eyes, mouth open, jaw flapping, mouthing off tacticool or crazy stuff he heard somewhere else, unable to listen to the wisdom of others.

In a world of selfish assholes, you have no choice but to stick close to family and tribe. Selfish begets selfish. There are some really decent people out there. I have met many of you on my training classes.

What needs to happen, and what I have made it my mission to do, is to tear the band-aid off this whole tacticool/selfish prepper meme. Just tear it right off and expose it for what it is. We need to be training right, networking with others, and getting ready to do something other than hiding in our basements. In your area, you need to plan to put your families somewhere safe, so you can grab your gear and rally to the call. Because, make no mistake, enemies foreign and domestic are coming. As individuals you will die as individuals.

OPSEC be damned – organizing civil defense groups is entirely legal with this United States, however the tyrannists try to paint it. Don’t listen to them. Just do it. It’s part of having the courage to stand up.  Organize. Be ready to stand up and help your communities. Have a trained tactical capability to back up any work you do in the community. Oath Keepers is doing it. Oh, but now you sneer, because you don’t like OK for some reason? Well, they are doing it, and you are not, so put that in your pipe and smoke it.

I think I might start a forum. Anyone any ideas of how I can simply get one going linked to this site? Something at a ‘bits of copper wire and some 100mph tape’ level of computer expertise….

For those of you who are awake enough, with a teachable attitude and a suppressible ego, I welcome you to come and train with me if you haven’t already. It is vital that you get the right sort of tactical training in real light infantry tactics. Something that an ex-military trainer can provide. If not from me, from someone offering something along those same lines.

I have always been pleasantly surprised by the decent folk who show up at my training classes. When I started,  had fears of all sorts of crazy or criminal types showing up. Not at all. Its been a good bunch of like-minded professional types. Socially aware good honest folk. With the odd ‘ that guy’ scattered among them… you know who you are…;-)

And BTW: I had a couple of reschedules on my DEC 14/15 CRCD class so it is only half full. Taking names….