I am currently writing my fiction book, ‘Patriot Dawn: The Resistance Rises’. It’s a development of the idea of tactical fiction, written as a full novel based around a collapse/civil war scenario. Not too dissimilar to what we may be currently facing, oddly enough. As part of the storyline, it will include techniques and fictional descriptions of tactical techniques.

I rolled out my first very impersonal tactical fiction HERE. I am rolling this situation into the storyline, re-written to include characters etc, to illustrate some points.

Its not a manual, but I have read in many places that fiction is a great vehicle to bring people tactical concepts. For the down and dirty ‘how to’ of the TTPs, you need to look at ‘Contact!’ or ‘Rapid Fire!’

I am currently 120 pages in and I hope to have it ready around January time. Self published, as usual.

Here is a draft version of the cover: 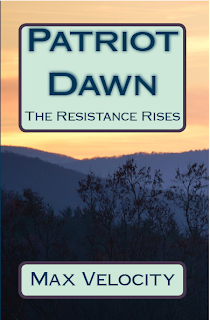 And the back cover:

The United States has descended into Civil War.

The Storm was Rising for some time, a Resistance in the hearts of American Patriots to the strangulation of Liberty by creeping Authoritarianism.

The scene was set. It just took a little push. A terrorist attack on the United States leads to war with Iran, followed by Collapse, as the economy goes over the cliff.

From the ashes, the Regime emerges.  Liberty is Dead.

What remains of the United States of America is polarized. The Resistance Rises.

Jack Berenger is a retired Army Ranger Captain, living in Northern Virginia with his family. Following the Collapse, they fall foul of Regime violence and evacuate to the farm of an old Army friend. Jack is recruited into the resistance, to train the fledgling forces in the Shenandoah Valley.