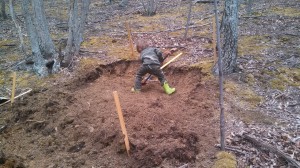 There was a muted amount of griping on the last (first) Combat Patrol Class, about the slight slope that students had to sleep on in the Lay Up Position (LUP). If you review this post ‘Patrol Class: LUP vs. Patrol Base’ you will be able to see the rationale of why I decided to break with standard patrol base convention.

The intent was to utilize patrol base standard techniques, amended to select a position better suited to concealment from both ground and aerial thermal surveillance – thus, to use terrain masking. For exercise purposes the selected LUP had to be situated on the ranges. So there were two primary factors involved in selection of the current LUP site:

1) To give an example of best use of terrain masking.

2) There is no flat place in West Virginia!

Given the aforementioned griping (if the cap fits, wear it!), and given that my broken hand is still on the mend, I sent my 5 and 3 year old mini-Max’s out today to dig sleeping shelves in the side of the draw, at the patrol base site.

These are not shell scrapes, but the discipline is similar. If you were less worried about ground sign, you could dig shelves like these to even out sloping ground. 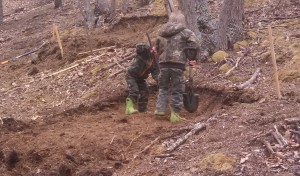 Above: Hard at work. You better be grateful, and get a nice kip on next time you are on the patrol class, without griping.