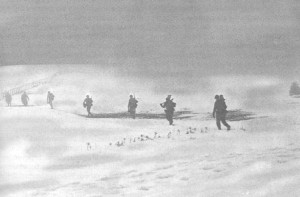 There have been numerous comments, for example in the ‘Out In the Woods‘ post, concerning winter clothing and equipment, sleeping equipment, and gear requirements, for the Combat Patrol Class, the first one of which is running on January 18 thru 20 2014.

I will update the information on that page as a result of comments and questions received on this post.

Here is a copy of the current information on the Combat Patrol page:

COMBAT PATROL: This is a three day patrolling class. It is a requirement to have attended CRCD prior to Patrol. This class will involve living in the field, tactical movement, actions on contact including break contact drills, ambush, raid and reconnaissance patrols. The first part of the class follows a teaching format similar to the CRCD class, with training taking place in the schoolhouse with transitions between teaching and tactical phases to practice what is taught. The course is entirely live firing, with electronic pop-up targets playing enemy. The final night involves an overnight tactical patrol base. Equipment is required as per a three day patrol pack, to sleep tactically in the field.

Classes are open to prior CRCD students only. Priced at $500 per person for the three days. There will be a requirement for one night spent tactically in the field. Gear and patrol pack/ruck will be required for the patrol base operationl. This will be a practical patrolling and live firing course. Class size: minimum 4 to max 12.

The class will follow the style of the CRCD class. You will not be thrown into the deep end with a three day patrol living in the woods. The Saturday and Sunday will alternate between teaching sessions in the schoolhouse, moving into tactical phases to practice what has been taught, then back out to teaching.

In this way, the topics from types of patrol, living in the field, contact drills, actions on various things such as crossing linear danger areas, ambush and raid will be covered and rehearsed, before moving into a full tactical phase to practice it live (with live rounds), then back out to debrief and further teaching.

Example: Ambush. The subject will be taught. You will then be briefed on an ambush scenario. There will not be time in the class for full sets of orders before each tactical phase, but the scenario will be briefed. The operation will then be rehearsed pre-patrol and we will then go out and conduct a live ambush in full tactical conditions. We will then recover back to the school house for tea/coffee and medals, a debrief and then on to the next topic.

Note: this class will focus on basic patrolling operations. The primary aim is to execute a patrol base/LUP, further movement and contact drills on top of those already practiced on the CRCD class, a limited recce patrol, plus a live ambush and raid. Each tactical operation, live or not, will take place within a briefed exercise scenario.

Accommodation: this will be the same as for a CRCD class. You will be able to stay locally in hotels/motels, or camp on site. The Sunday night is the exception; this will be a full tactical execution of an overnight patrol base/LUP.

Weather: bring appropriate tactical clothing for the time of year. Wet/cold weather gear. If severe weather impacts on the patrol base operation, it will be called in the name of safety, to prevent hypothermic or frostbitten students. It is about learning, not suffering. (Well, a little bit of suffering will be included, this is the infantry, right?).

Safety: Most of the tactical phases will be executed on the live ranges under range conditions, live firing. The usual safety rules from the CRCD class will be briefed and adhered to. When in other phases of instruction, and when overnighting, all weapons (rifles and sidearms) will be either fully unloaded or the ‘Make Safe’ procedure will be adhered to . This involves a full unload (chambers checked) followed by a load of the magazine, without charging the weapon (no round in the chamber). The ‘Make Safe’ procedure allows for a greater margin of safety with responsible weapon handling. It also allows a supervised intervention and ‘Make Ready’ command to chamber a round in preparation to a move into a live tactical exercise – and also allowing a supervised moment for ear protection to be implemented.

Gear: The standard CRCD suggested equipment list remains in place for Combat Patrol. In addition, you will be expected to bring and carry a patrol pack as well as your battle belt/vest. You do not have to carry all of the gear for the three days all of the time: a light patrol pack will suffice for most of the class. You will only be fully living out of your patrol pack for the patrol base overnight operation. Use it as an opportunity to pack light and sort out your gear. You will need to bring appropriate gear for the weather but don’t overdo it. We will  work with lighter patrol packs and then pack in heavier for the overnight patrol base phase.  It is about training and learning, not humping heavy gear.

For winter classes, Make sure you bring cold weather and rain gear, a full change of your tactical training clothing, spare socks, hat, gloves, headover etc. Not all of this gear needs to be carried all of the time, but it should be available. Conditions dependent.

A headlamp is invaluable, with a red or green filter. Bring a small tactical flashlight (red or green capable). Have a tactical flashlight mounted on your rifle if possible. For tactical operations at night, including the patrol base, you will not be using light. NO LIGHT. Light discipline in the patrol base will mean you will have to be able to pack, unpack and find gear in the dark. For non-tactical phases at night, the headlamp is ideal.

Ammunition: As per CRCD, minimum 500 rounds. More is always useful. I will get more specific on ammunition amounts as the class beds in.

Rations: as per CRCD, bring food for lunches and for all meals if you are camping. For the patrol base overnight, you will need to bring appropriate rations. A couple of MRE’s will suffice. You are also welcome and encouraged to bring some sort of small camping stove, such as a propane or solo stove, to heat water/food and to make hot drinks. For tactical phases, these will be used as appropriate to the tactical situation and during daylight.

Entrenching tool: you will not be digging shell scrapes for the patrol base. You will have access to the latrine on site during the class and also during the patrol base operation. For this class, an e-tool is optional, but remember that you will need one for real.