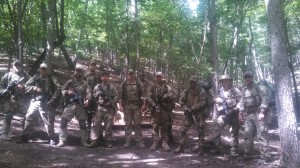 This last weekend was a 3 day Combat Patrol Class. It was a good class.

Chris was there throughout helping with the instruction, and Fred also came down to help out.

My observation for this class is that it seemed that I had a group of infantrymen to train. We were approaching that level. Obviously with CRCD as a prerequisite to this class, they had all done it previously.  What stood out was that they had all taken the lessons learned on CRCD seriously, gone away and continued to train, and also taken the PT seriously. They had not paid lip service to it.

This is one of the things to consider about the 6 day combined classes. I talk enough about PT on this blog, but some just pay lip service to it. In other words, they don’t bother their asses. If you take that attitude, and wait for a 6 day combined class to call you out, you are in it till the end, unless you quit. If you come on a CRCD class, and learn the PT lesson, you have time to fix it before you come back on Combat Patrol.

The upshot of everyone being a serious student was that the class went smoother, with less stress, and less need for me to bollock anyone. The random factor was greatly reduced. The recce patrol, ambush and raid were great. The raid was like a movie. The proprietary secret exercise on the final morning went well. The casualty was carried and not dropped.

That doesn’t mean don’t come on a 6 day – I will be scheduling less of them anyway in 2015 – but it means when I say do PT, do your PT. Be prepared. It’s 6 days, so it adds up and takes its toll even though the individual training  events are not that bad in themselves.

If you come on a CRM, or  CRCD, and need more PT and weapons manipulation training, do it. Get it. Work at it. Then come back and get the benefit of Patrol.

Hopefully ‘Shitbreak’ will pull his finger out and send me the rest of the photos he took of the class for publication on the blog. I also hope to get some student reviews  – because if it happened in the  woods of West Virginia, and it doesn’t go on the interwebz, it never happened!

I am getting closer to publishing 2015, up to  June. I’ll initially put out the dates for CRCD & Combat patrol, then add CRM, C2G, Night Fighting etc. The new CRU-TT (Combat Rifle Urban – Terrain & Tactics) is tentatively scheduled for spring 2015, allowing me time to get the site built. CRCD will be a prerequisite for CRU.

Bottom line: DO YOUR PT. TRAIN.