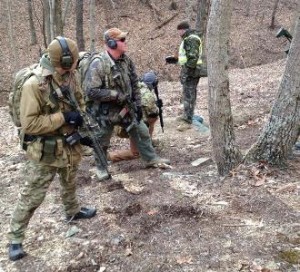 The Patrol Class is the most recent evolution in the training offered by Max Velocity. Completion of a Combat Rifle/Contact Drill is a requirement for attendance. That being said, you really must attend one of Max’s Patrol classes. I don’t mean to overstate, but it was some of the most effective tactical training I have ever received. Especially if you don’t have any experience in the combat side of the military, the jump from CRCD to Patrol will open your eyes to the reality of life in the field (i.e. life without central heating or 500 television channels… or pizza delivered to your door…!) In short, the Patrol Class curriculum picks up where the CRCD Class left off.

CRCD gives you the basics of fire and maneuver. It offers a chance to familiarize yourself with your weapon system and your basic fighting load. It introduces you to the three pillars of SHOOT, MOVE, and COMMUNICATE within the context of the fire team. Only at the very end of CRCD do you conduct a squad sized evolution.

Patrol gives you the tools to begin to think like a light infantryman (and if that’s not your proverbial cup of tea- the tools to think about what survival without modern conveniences may look like). Max covers a broad swath of information: organization and administration, gear, as well as some of the tactics and skills needed to be a contributing member of a survival group. There’s so much good information that, to truly gain the most, I think you need to study up before you go. Obviously attend a CRCD class. Review fire team tactics. Brush up on land navigation and how to use a map and compass. Don’t be afraid to pack light, and see how you fair without every fuddy-duddy gadget plus the kitchen sink. Start an exercise regimen (if you haven’t already done so) that includes walking with weight. You must prepare to get the most out of a challenging experience. That being said- you don’t have to be Rambo to complete the course. The most important thing is that you get out and DO IT!

Here are the things that I took away:

For those who are on the fence about attending the class- do it. I’ll leave you with a short rhyme:

On the strength of one link in the cable,

Who knows when thou mayest be tested?

So live that thou bearest the strain!

And to those who bore that strain with me this past weekend- well done!