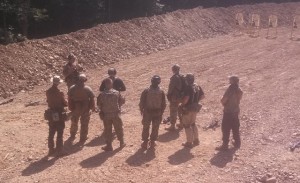 Above: RMP Class on the new range, which is about 80% complete.

The MVT Training Facility has been running for just over  a year now and there have been significant developments and additions to the facility itself, and also the training classes being offered. I started off with the Combat Rifle/Contact Drills (CRCD) class as the basic open enrollment tactical class. As we have developed classes to better serve your training progression, I have added more advanced classes such as Combat Patrol (CP), the progression classes such as the recent weapons manipulation class additions, as well as the building of a square range to host them.

As we have reviewed the class offerings, and consulted students about it, it is apparent that CRCD has developed. At the same time, one of the main things that is holding back the learning experience of students on the tactical classes is their level of weapons manipulation training. Sometimes, Aaron and I have to call on the depths of our instructor-fu to coax some individuals through. Yes, we will get you through, and tailor the class to your ability and experience as you go up the lanes, but that is not really the point – we want to you to get the most out of the training.

I think that two of the main things that are holding back learning experiences on the tactical classes are:

We can work with the PT. We can also work with the weapons manipulation skills – that is what we do. However, if you spend the weekend with your head in your weapon, unable to keep it in the fight, you are not getting the maximum learning experience. One of the things that students seem to hugely overestimate is their ability and skill at weapons manipulation. Remember, the tactical classes immerse you in a simulated combat environment and make you perform under stress. It is while operating under that stress that the poor manipulation skills come to the fore. Many people just don’t know how bad they are till they try and do this. It is an eye opener for many students.

We have already added the Rifle Manipulation Primer (RMP) class as part of a pre-day to all CRCD classes. It runs along with combat lifesaver training. Due to people’s schedules, I have resisted making this compulsory. However, it is so useful to students that I am almost at that point – it will hugely increase your ability to learn on the CRCD class that follows – and either way, I strongly encourage you to attend the TC3/RMP training prior to CRCD classes. If I had my way, I would make it mandatory.

We now have the Combat Rifle Manipulation Class available. As a result of  AARs with students, one of the reasons we added both CRM and RMP was to provide a confidence building stepping stone to the tactical classes. Something you could also bring family members to if they were psyched out by the idea of CRCD. These manipulation classes will get your skills up to a level where you will be able to tackle the tactical classes with much more confidence. We are at the point where we have progressed so that CRCD is no longer ideally an entry level class. You can complete it, but you won’t get the maximum benefit from it if your manipulation skill level is low.

1) RMP will remain optional but strongly encouraged prior to CRCD classes, even for alumni. We all need refresher training, as much as we can get.

2) CRM will be mandatory as a prerequisite to CRCD classes, unless:

3) –  you can demonstrate that you have taken at least 16 hours of accepted weapons manipulation training. MVT will have the final say on what training/schools we accept. Don’t try and bluff it, you are only cheating yourself.

4) Those currently booked onto CRCD classes as of the date of this post will be grandfathered in and will not require CRM. However, RMP is strongly encouraged (CRM encompasses RMP, and both classes are still encouraged prior to CRCD).

5) If, despite these prerequisites, you are able to bluff your way onto a class, and the remedial training/individual attention required to get you up to speed will affect the training experience of the rest of the class to an unacceptable level, MVT reserves the right to stand you down from the class. We haven’t done it yet, but with these new policies there isn’t really any excuse. One of the main problems we have is with students who have training scars from bad schools or self-training. RMP helps with this, but CRM helps a lot more.

If I had my way, and knowing the quality of the training that Aaron runs, I would make CRM the the only acceptable prerequisite. That may happen down the road. For now, suitable equivalent training will be accepted. I am aware of the fact that many of you will travel a long way for MVT tactical classes because they are unique, but may not be willing/able to travel so far for what you may perceive to be ‘just another square range class.’ CRM isn’t that, in fact it incorporates many of the skills that dovetail right into CRCD (burst movement, bounding etc), but you won’t know that till you do!

Just remember, we don’t expect you to be perfect when you show up to CRCD, that isn’t the point of training, but you should be workable. Attendance at CRM will also allow you to work out any equipment or gear craziness that you are unknowingly doing, and this will prep you a lot better for the tactical classes.

EDIT 24 June, following a question: Yes, CRCD Alumni qualify for the 16 hours training prerequisite. However, take an honest look at yourself and consider the following before attending another CRCD class:

1) Would I benefit from RMP?

2) Would I benefit from CRM?

Prior to CRM, the only way to get the benefit of more training was to attend another CRCD, which plenty have done, or attend Combat Patrol, or both. Everyone has told me how much benefit they got from another CRCD, often because their head was less in their weapon and they were less handicapped by tunnel vision. They were more situationally aware. Continuation training will do that for you.

Why won’t you hit the target?

(My apologies, apparently that was a quote from me from the weekend).