I have just finished listening to ‘The Way of Men’ by Jack Donovan. I recommend it. 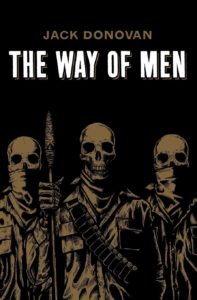 I found it to be a very interesting read, and also ‘uncluttering’ to the mind. It helps to cut away the crap of our modern cultural brainwashing and give clarity. It is very much in line with preparing for uncertain times, and also for the importance of tactical training. I enjoyed the description of the need to find men who are good at the true role of men, who are effective at standing guard around the camp, where outside the ring of flickering firelight lies the threat.

Some of the clarity that it gave me follows:

The point was raised on the forum that although we may be an online community at MVT, what we lack that would make us ‘tribe’ is proximity. Thus, many of us would end up fighting alone. I have made the point that the more tactically trained you are, including team tactics, patrolling and ambush, the better you will be able to perform individually. Simply put, the better trained you are, the better you will be able to fight, even if you are on your own. However, the answer has to be that you must seek others, other men, with whom to fight. A man on his own will, ultimately, be taken down. This idea of the ‘rugged individualist’ is a big cultural problem. We must seek teams in order to survive, and we always have done. People will group up together to face adversity – the problem is that we do not face much adversity in our soft modern lives, so that if it is thrown suddenly upon us, we will be in trouble. Thus the danger of collapse, or descent into further civil unrest – we need to wake up to the realities of what is needed NOW, and get ready now, because a self-defense situation involving ourselves or our families does not get a do-over.

There was a lot of realism in terms of gender roles and realities. I have always been in favor of both men and women training and being able to fight. I still am. Some women have done very well at classes and I encourage it. However, we have to face realities. We want our women to be able to fight, but probably more as a backup if we go down, a final protection of the children. But that in itself is not the point- there are very few women who will actually attend real tactical training. They are almost the exception that proves the rule. Women have gender priorities. This is the great struggle we hear about all the time – someone complaining that he can’t get his wife interested in training. Accept it for the reality that it is.

The corollary to this is that 90% of men are sheep, not warriors. In the comfort of our lost society (‘bonobo masturbatory club’ LOL) few are motivated to train, to truly train (I do not include firearms ‘hobbyists’ or cool guys of various types under the ‘training’ description). We also have to accept this for what it is.

So, I am saying that for the vast majority of people, they do not have it inside them to be warriors, to train to truly be effective. So forget about them, for the purposes of training.

There is much talk about ‘tribe.’ Tribe takes time to grow, and is an extension on top of family. What we are really talking about here, is cultivating  a protective group, a small war band, as our initial step. I have in the past used the term ‘CUTT’ (Citizen Unconventional Tactical Team) but let us simply call it a Patrol. What we need to do is focus on teaming up with suitable men who are capable of standing guard on that perimeter, of conducting guerrilla raids and ambush. This does not mean that we disregard everyone else, because the families of those men, in time, become the tribe, and will be filled with women, children, and tactically incapable men; those who are not capable of standing on the edge of the flickering flames, on the perimeter. They will contribute in their own way. Everyone has to contribute. If you have tough well trained women, great. They are the inner defense.

I say to you: pull the weakness of modern social conditioning away from your mind. Discard it. Stop with this ‘prepper’ thing of trying to recruit people to have lockers in your basement ‘retreat.’ Stop wasting time trying to ‘convert’ people. What you need to do is spend time in places where you can meet those who have it within them to be part of a Patrol. We are looking for people that do not need to be persuaded of the need to train tactically as a team. Spend time with them, build bonds. There needs to be relative proximity to where you live. Disregard those who have given in to the weaknesses of modern society.

Granted, there is much ignorance out there and many who ‘Don’t Know What They Don’t Know’ – these may not even know about tactical training such as MVT being available. I would suggest that making them aware is as much conversion as you need to do – they will either seize the opportunity, or they will not.

Given that 90% of men and perhaps 99% of women are not mentally or physically in a place where they will take this seriously, disregard them for membership in the Patrol, other than as auxiliary members of the tribe who will fill other roles. Once you find your patrol of tactically capable men, then the tribe will build around it.

Other than injury or disease, there is no excuse for being physically out of shape, and not training tactically. You should not have any time for it, and I should have no time for it as a trainer. No whining or excuses, just get it done! There may well be resistance from wives to doing this kind of activity It is a big issue for feminized men in this society. Apparently they cannot find a weekend to go training with the boys. Bullshit. You are either going to make it happen , or you are not. There will be resistance from the woman in your life when you want to spend time training with the Patrol. This will never change. You need to balance it, if you take the threat of these uncertain times seriously.

I know it is a big issue finding people with the potential to be part of your Patrol. You will meet people at class – this sometimes comes with a proximity penalty, but there is also the MVT Forum as a resource for meeting people in your area. But you can’t just meet people, and train occasionally. You have to spend time to develop the bonds that will build into tribe. You have to share hardship, whether that be training together or doing some other activity.

This is not some anti-woman piece. This is just acknowledging the reality that we see every day, absent modern cultural bullshit that tells you otherwise. Women are more than welcome at training, and can become very capable.

What do I mean by ‘become savage?’ Do I mean act like an asshole? No. Maybe! I have often talked before about ‘standing up’ to things like political correctness (cultural marxism) and the general madness of the Hard Left in this country. Feminism. Not allowing boys to be boys. All that. So when I say ‘be savage’ I am referring to a general lack of tolerance of any of this bullshit. Call it for what it is. Understand that you are men, and must act like men, and that this is vital for your survival when this place finally collapses. Give zero fucks if you upset idiots in current times, by just telling the truth about what’s what.

One huge problem that we face, and why I often talk about the huge impediment to training caused by EGO, is that of the untested ego in our modern society. Everyone is a self-invented legend in their own lunchtime – they are not tested or measured. At least if you train with peers, your ego will be tempered with reality. Your ‘no child left behind’ entitled ego will be adjusted accordingly!

I have personally gone back and forth with the idea of a collapse being in any way positive. I am at the point where I see no way out but through. Seeing what the Hard Left is doing to this country, I say, let them collapse it. Then let’s see them try to ride the tiger. I think we may have to go through the collapse in order to purge ourselves of this weakness, this madness. Yes, it will not be pleasant, but if the Left is intent on destroying it, let them. Trump gives you breathing room to prepare, to train, to find and develop your Patrol.

Comments closed on the blog. Constructive and helpful discussion takes place on the MVT Forum.

You thought that Trump got elected so it was time to crawl back under your blanket and go to sleep? Given events in the country and commentary on same, it would appear that we have never faced more uncertain times.

You need to take steps to PROTECT. DEFEND. SURVIVE.

Work on your physical training. Lose weight. Become dangerous to your enemies. Become the protector that you are supposed to be.

Luckily for you, here at MVT we provide leading edge training on the full progression from concealed carry handgun, up through combat carbine, team tactics, close quarter battle, and force on force training.

Don’t be that Dunning-Kruger guy. It is time to wake up, shed the false bravado and untested ego, develop some humility and a tolerance to learning from short term setbacks on the way to greater success. Do not fear failure, it is merely learning on the path to greatness! Here at MVT, we are a no-ego school dedicated to helping you become tactically proficient.

When you need it, it will be too late to learn it. There is no second go at self-defense, and the defense of your family

Recent useful posts about training and why to train:

‘Jack Donovan: All Training is Sacrifice.’