Arctic Pilgrim: Links for components of a battle belt 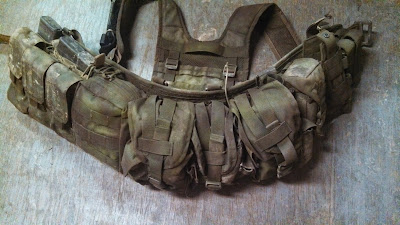 Building a Battle Belt from Max Velocity’s Template: Links
Quote:
“FWIW, Max himself will tell you that he makes no claims about this setup being the end all/be all of setups, only that it is functional, and largely made up of what he had at hand. Max’s approach is a good one, in my opinion, using good gear that is on hand, keeping costs down, and using rattle-can-camo where necessary to turn ACU into OD green, for instance. I’ve done that myself on a few occasions, having “kryloned” my ALICE ruck, a few misc pouches, boots (long story), and more recently a slew of AR magazines, my .308, and my beloved AR.”
One thing: if you build a full light infantry battle belt like this, and put the gear in it, it will weigh a little. That is kind of the point – it allows you to carry a load of good basic gear on your belt. Don’t come whining back saying it’s too heavy – if so, go make up a tacticool battle belt with nothing but a taco pouch or two, a dump pouch, and some other half-assery. Then get yourself down to the square range and do some tacticool stuff to impress some range groupie chicks.
No-one said that operating as light infantry, or unconventional warfare resistance fighters, SHTF survivors, or whatever you want to call it today, would be easy. You have to carry at least a basic load to be able to stay out and sustain yourself for the fight.