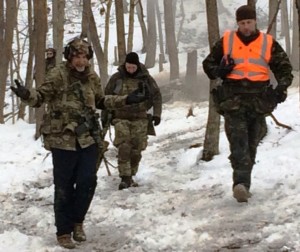 Walking in a Winter Wonderland

On the face of it, driving 600 miles in mid-December to spend two days running around in the snow in mountainous West Virginia sounds a bit ridiculous.  Add in live firing of high power rounds simultaneously with multiple strangers in a three dimensional range while others are moving around you?  Absurd, right?  Finally, if one considers the purpose for most of the participants in being there is to prepare for a serious disruption in the structure of society, it becomes total lunacy!  Tin foil hat stuff… you know, stuff like those guys wrote in Enemies Foreign and Domestic or Patriot Dawn.

Let’s think about this: a man writes a novel about the collapse of society and patriots joining together for self-preservation and restoration of liberty.  The same guy wants you to pay him so you can be a super-ninja, right?  Sure, sounds like a scam to me.  Everyone knows that all you need to do is go do “tactical training” with 20 other guys shoulder to shoulder firing hundreds of rounds into a cardboard target 20 meters away.  That is how the ‘high speed’ guys do it, right? Wait, you’re trying to tell me that ‘tactical training’ is NOT going to make me invincible in a societal collapse?  I need to learn “fire and movement?”  What is that?

Sarcasm off.  I have watched videos of training at ‘square ranges’ standing (or kneeling, or perhaps lying sideways on the ground, or even on one’s back) firing countless rounds at a paper target and wondered how this would translate in the real world.  I have read a great deal online, and have followed the blog posts of Max Velocity (cute name, eh?) with great interest.  He presents a compelling argument for the type of training that he does, and the limited usefulness of what passes for ‘tactical training.’  I have also read his replies to comments, and have discerned a good bit about his character from his writings.  Based on this, I decided to travel to West Virginia in December 2013 to experience this first hand.

Although there are reviews that describe his training schedule and agenda, I will summarize for those of you who are unfamiliar.  He begins with, and continually returns to, SAFETY.  He is extremely safety conscious and this is a core concept both for training as well as for the ‘real world.’  I probably had more safety violations than any other student to which he responded quickly, firmly, and appropriately.  As an example, on Sunday he stopped me for probably the third incident of moving with my muzzle close to horizontal, not towards the ground.  He IMMEDIATELY got my attention but simply said something like “you know why I stopped you” in a calm voice.  I immediately knew and was grateful for the reminder in a non-abusive fashion.  Max is a TEACHER.  More on this below.

After the opening safety brief, he moved to the fundamentals of fire and movement, starting with RTR: upon contact Return fire, Take cover, Return appropriate fire.  At this point, the first live fire exercise: individual RTR drill as a response to contact front, contact right, contact left.  Prior to class, I had read the sections in his excellent book CONTACT, and so this would be a simple, almost mindless exercise, right? 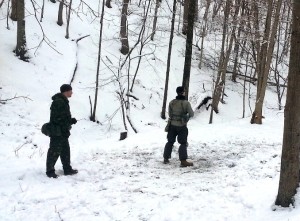 WRONG!  Wow, things change when you are in a 3-dimensional live range in the woods.  Even such a simple exercise takes on a dramatically different feel in this environment.  During the first few drills the student KNOWS where the target will be, and yet there is still a lot of adrenaline and tension.   On the last rep of this initial drill you don’t know which target he will bring up, and the experience was enlightening.  My heartrate blasted upward during this. 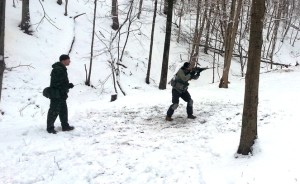 Next buddy pair movement is addressed: fire and cover, one man firing while the other moves, then take cover and fire and your buddy moves.  Forward assaulting drills and break contact drills to escape were done in buddies.  Then it is on to four man fire teams: two buddy pairs. 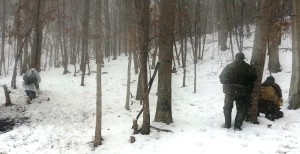 After the first day, most of us gathered at a local restaurant for some Mex and conversation.  Max showed up an hour later.  I had the opportunity to converse with him and get a feel for who he is.  His character is actually his most outstanding attribute even over and above his vast knowledge and experience in small unit tactics.  I will conclude with thoughts about this.

Day two began with the “Jungle Walk”.  This is an individual walk up his bigger range with Max.  Targets appear and one performs the individual RTR drill multiple times.  While this was being done individually, there was a talk on TCCC by an experienced physician back at the training pavillion.  What a great bonus!

Max Interjects: Dr. James Berry of TACMEDICINE – he kindly agreed to provide the concurrent activity class while the jungle (arctic) walk was ongoing on the Sunday morning. Note: I am always interested in volunteers with interest classes to teach during this time period – we have had a CBRN expert and now a TC3 expert fill this time slot.

From there Max continued to teach and then progress through two man drills to four man drills on this longer range.  The day concluded with the ‘bunker assault’ which was an exercise utilizing all of the students with two of us serving as an assault team to the bunker.  As we moved downrange, there was live fire into the bunker off to our right.  Safety remained a prime concern as there was a walk-through before hand, and a student with prior experience at this class acted as team leader for fire support.  Fire was shifted away to the right at Max’s signal.  Although we never had rounds whizzing by our heads (or ‘cracking’ as I have heard happens with a supersonic bullet zipping past), the experience of fire support off to the side was loud and intense.  The simulation of real-world combat in a safe environment is a monumental task to undertake, but I believe that Max pulls this off beautifully.  At NO TIME did I believe myself to have been in any danger, yet I was able to experience something akin to real armed warfare.

A final debrief and we collected our gear to head out.  All agreed that it was an outstanding experience.  About half of the class were repeat students, and they said it was better this time around and that it was VERY worthwhile to repeat.  This brings up another important element in the class: the group interaction.  I met people whom I would trust at my side in combat or simply day-to-day survival.  I learned from them, and hopefully imparted a bit of my own wisdom to some of them.

I won’t detail specifics about gear (both what worked and what didn’t in these conditions) at this point, but may write further about this going forward.  There was no question that I was reasonably equipped for the training, and only got cold at times while seated ‘in class’.  Walking over to the fire barrel helped!

Thoughts on Max: clearly this man has a great deal of knowledge and experience in small unit combat tactics.  This is light infantry stuff, not artillery nor swat.  It is the type of situation that we are most likely to encounter in a societal collapse, which is why I made the effort to take this class.  To invest the time, money, and effort to attend such as school 600 miles away during a snowstorm is not something to be taken lightly.  Granted, I didn’t know that we would have 6″ of snowfall, icy road conditions (it was interesting trying to get personal vehicles back to the parking area for the class), and flat-out COLD weather.  If I had known I might have had second thoughts about going.  That would have been a mistake!  The bad weather did not deter from the training, and the benefits of the class far outweighed the cost ($, time, travel, discomfort).  Why?  Very simple:  Max!  This man is a teacher who clearly has both a gift to teach and the heart to do so.  He communicates effectively, deals with mistakes appropriately, and builds the confidence (as well as knowledge) in his students.

As someone who has done a great deal of teaching / training in my own professional arena, there is a fine line to be walked between supporting/encouraging students vs. enabling bad behavior.  Similarly there is a fine line between firm, consistent correction vs. abusive response.  In a setting such as this, an abusive Drill Instructor is NOT what is needed!  As I noted above, I believe that I was the most frequent safety violator, and Max dealt appropriately with me in a private fashion.  Perhaps I wasn’t aware of the corrections of others because of how he handles the process.  Max seems to have the gift to know how best to approach a particular student and has great patience.  I KNOW that it was frustrating for him at times dealing with certain questions.  His ability to respond APPROPRIATELY rather than EMOTIONALLY (gut response) is one characteristic that sets him apart from many teachers.

More broadly, in private conversation with Max I found him to be intelligent, funny, insightful, compassionate, and morally upright.  Character matters!  This is a man whom I would trust at my back in combat, but I would also trust him as a friend with personal matters.  He is someone I would want as part of my ‘team’ or ‘prepper group’ even without his expertise.  This is based on who he IS, apart from what he KNOWS.  This is character.

In closing I would reiterate these points: this class was an outstanding experience taking someone who has NEVER fired an AR anywhere other than my local range (and I am relatively new even at that) and giving me valuable training and the confidence that I am FAR better prepared to defend myself and others.  His site is very well designed for the purpose, and he continues to improve it all of the time.  Most importantly this man is a TEACHER.  I consider this high praise. 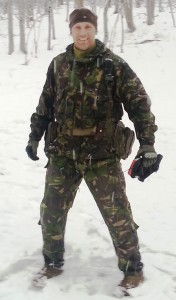 ApoloDoc snapped this photo of me, above.