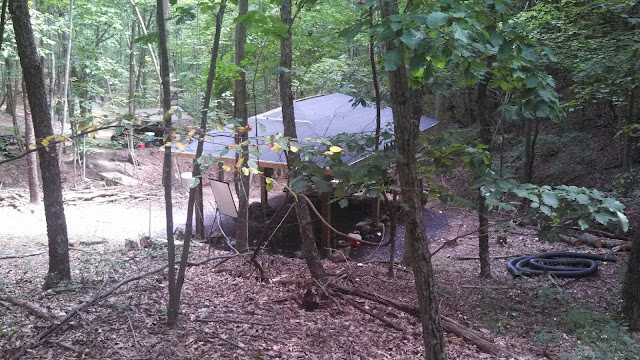 Rather than write another AAR that says the same things as others have said, read thisfrom WRSA 6 and get there to Max.  Now.
Why this training is important, from an old Infantry officer’s point of view.
Synchronization:
You’re probably going to be stuck in your region when things go pear shaped.  It’s best to be on the same training plan as others.  That’s why I ended up at Max’s, as opposed to Mosby’s or Treaded’s training.  Are those trainers worthwhile?  Absolutely.  But I’m coming home, so I wanted to have a common training base with those around me.  Given that Max will soon be cranking out about a battalion’s worth of folks per year, the likelihood of running into some of them gets higher every month.  It’s a lot easier to get that common operating system in place, now, than to figure it out on the run.  Max also does an excellent job of tailoring his program to fit the physical environment in the East, which is radically different from the Midwest and the intermountain West.  If you can only afford one course, stick to your region.
Communication:
Not only in the small unit sense, but also across units and cultures.  As WRSA 6 noted, there were .mil and civilians mixed together.  Tactically, issues were quickly worked out internally but culturally there were some interesting moments.  One gentleman asked if someone had any “ancids.”  I looked at him and asked, “Why in the world would he have an Automated Net Control Device (ANCD)?”  What he meant was NSAIDs (non-steroidal anti-inflammatory drugs).  I was joking with him, but it turns out to be an adequate example.
The point here is groupsneed to be able to communicate across existing cultural boundaries.  FM 7-8, 7-10, and the Ranger Handbook are canon here.  You former officers, who take your oaths seriously, unto death, need to step up.  Our retirement is swirling the drain already.  Make them work to take it away.
Max’s drills are fantastic.  Practiced until they can’t be done wrong, then rehearsed before the mission greatly reduces the need for verbal comms and subsequent misunderstandings.
Networking:
One of the issues we discussed this weekend was link up of individuals and units if it all goes worse.  Specifically, do we have link up points, events that trigger link ups without comms, and missions (Complete with task and purpose.) to execute should it come to that?
The short answer, under the fine new pavilion, was “No.”  OK:  At least we know where to start.  Individual and small unit training is vital, but we need to know how to link up and what to do next, sans interwebz.  This leaderless resistance nonsense is, well, nonsense.  Somebody is going to have to get this rolling, coordinate, deconflict, etc.  No, I am not attempting to take over.  Yes, I will be glad to help.  Stay tuned for more.
Plan to stay on site.  The friendships, team building, war stories, and informal coordination are worth putting up a hootch.
Max, and others, is doing the community a tremendous service.  Please take advantage of it.
Physical fitness:
Just do it.  You don’t need to be able to do a 300 meter shuttle run in 30 seconds with a truck on your back to complete this course, but it would help.  You can’t be in good enough shape for combat.  Jogging and gym ratting doesn’t cut it.
Get a kettlebell and use it.  Surf over to Tactical Athlete, then read and heed.
And for the gear oriented folks:
Know how to run your rifle when you arrive.  Safety, sling, mag changes.  You will get better but if you show up with a rifle that’s covered in packing grease, you’re going to have problems.  Dry fire and manipulation drills will suffice.  You don’t need to look like a MagPul training video, but you’d better not look like a third world policeman either.
This was the first time I used the Millet 1-4x ring dot on my M4.  It rocks.  I left it on one power and turned on the red reticle for most of the drills.  The final exercise was a squad attack on the bunker.*  I ran it up to 3x for that and was able to see into the interior and place shots as precisely as an old man gasping for breath could.
(*As noted elsewhere by Matt Bracken, attacking a bunker should be avoided, at least in the beginning.  Max uses it as a culmination exercise to demonstrate skills and it is a fine vehicle for that.  From individual movement techniques to squad collective training in one weekend.  Good stuff.)
The Daniels 13.25” rail is excellent.  It held my VITAL aiming laser and Sure Fire well, with room left over for another CAT (tourniquet).  It free floats the barrel and is money well spent if you have long arms.
My M4 hates HK mags.  I’m glad I didn’t pay for them.  They’ll be getting a shot of blue paint and then tossed in the training bag.
Grease doesn’t work on an M4.  Parts are too small and too closely fitted.  Use oil and lots of it.
War belts work.  I ran mine with two HSGI kidney pouches (canteen cup and stove, heat tabs, PVS14, assorted junk) HSGI suspenders, a large trauma kit, 6 mags, and a grenade pouch with lensatic compass and cut down signal panel.  Everything stayed in place and in the HSGI pouches.  I can drop my plate carrier on with no changes to the belt; carry my MOLLE ruck, etc. with no problems.  Old school with improved pouches and comfort.
(Attribution: QuietMan is the nom de guerre of a career US Army Infantry officer turned contractor.  He had planned to retire to the mountains to worship God, play with grandchildren, and fish.  He is quite irritated that politicians are interfering with that plan.  He may be reached here.)