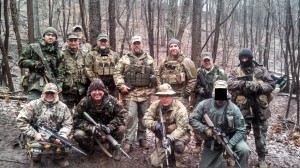 I won’t bore you with every detail of what happened in the CRCD class 29-30 March because you can read all the other AARs out there to get the nitty gritty details. I will share some of the things I took away.

This was my fourth class in tactics. After going to many tactical rifle and pistol classes I realized that even though these were not square range schools, I had come to a plateau in my training. I also realized that while individual weapons handling skills were good, ultimately it was tactics that won the fight.

With a group of friends, I attended a one day introduction to small unit tactics at One Shepherd. I had been reading John Mosby on WRSA and when I found out he was going to be in WV, I sent my money in right away. I came away from both of these classes with the realization that I needed more training because there was too much to learn at one class.

Sometime in the summer of 2013 I heard about MVT. I checked him out on WRSA and I signed up for CRCD in September of 2013. I saw a marked improvement by the end of the first class and I also realized how multi-spectrum tactics were. Not only did I have to shoot, move and communicate, but I had to keep and eye out for the enemy, keep an infantryman’s eye on the terrain and maintain situational awareness. ( I am sure there is more, I just haven’t learned it yet). At the September class, there were two prior service Marines with multiple combat tours and they were in the class for about the fourth time. I asked them why they would keep taking the same class and the reply was “I get something different out of it every time. I also get to work on different aspects in each class. Like improving my ability to take cover and take better cover.”

By the end of the first class, I understood what they meant. There were just so many individual tasks that had to be done in a short space of time, there was no way I could learn it in one class. At the end of the first class at MVT I was pretty good at returning fire and taking cover, but I totally sucked at communicating and situational awareness was non existant. So when a couple friends of mine signed up for the class in March 2014, I figured it was a good excuse to do it again.

Even though range 1 and 2 were somewhat familiar territory, the popups still took me by surprise. I thought I did pretty well in the RTR drills but as I was driving home and replaying the weekend, I realized that I left out a very important part of it. I did not seek to improve my cover. I also realized by day two that I was not going prone like I did last time. It seems that since the ground was muddy that I instinctively didn’t want to get muddy. I began correcting that on day two. I noticed a marked improvement in my communication. I also noticed that I was able to maintain some situational awareness and take my face off the rifle from time to time to figure out what everyone was doing.

Now I will begin talking about equipment and what worked and what didn’t.

The Vortex extra battery holder that was on the rail of my rifle, didn’t. It broke at some point and fell off. I did recover it, but will not be putting in back on the rifle as it is not durable enough to take a beating.

The Aimpoint H1 that was on my AK74 worked, but I had recently installed it (this was the second one after I overheated the last one and sent it in for repair) and only put about 20 rounds through it to sight it in. One student said he was watching me and noticed my rounds were impacting high and right. I dialed it in and was making head shots after lunch of day two. Apparently it had settled in a little and shifted POI. Note to self: Put more rounds downrange before declaring a zero.

My chest rig was a Strike Hard gear and one of the mag pockets was smaller than the other and would not allow easy removal of the mag.

My FIME converted Saiga AK74 was modded with the following:

Needless to say it ran like a raped ape. I still prefer the AR platform, but with the cheap ammo this is a good alternative. The one thing I would do to any AK is get an extended safety so you can sweep the safety down with just one finger. The Lightning Bolt speeds up reloads as well.

PT! You can never have too much of it. Even though I scored a 250 on my APFT, I still felt like I had lead in my ass.

Heh: Re: my previous post on the new battle rifle policy, Duane posted a photo of the class rifle rack over at this AAR post on the Forum HERE. The offending rifle is in the photo! Max.