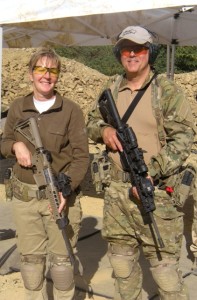 About ten months ago I made the decision that I did not want to be one of those guys that buys an AR, puts it in the closet and hopes for the best.  I committed myself to the idea that I was going to acquire some basic skills and work towards achieving competency with this tool.  Prior to the weekend of 20 September, 2014 I had previously attended TC3/RMP, CRCD (twice, although the second time I missed day 2) and NODF (twice).  I have posted AAR’s describing my experiences as a student at MVT in each of these classes.  If you search the blog, these AAR’s are readily available and may provide additional context.

In May, I showed up for the initial CRCD class that I had signed up for and for what I had anticipated would be a full day TC3 class.  As a result of training schedule changes I found myself somewhat unintentionally a student in the Rifle Manipulation Primer class (RMP).  To be completely transparent, I would likely have not signed up for the RMP class had I not been planning to be on site that morning anyway for the TC3 class.  As noted previously, RMP was a pleasant surprise.  RMP gave me an opportunity to shake off the cobwebs and build some confidence ahead of CRCD.  I also discovered that I did not know everything I needed to know about running my AR effectively and found an instructor with real world experience, committed to teaching.  I left RMP with the notion firmly planted that additional training would be a good investment.

Several months later the MVT course structure has changed a bit and RMP no longer exists.  Its been replaced by a beefed up two day Combat Rifle class.  As indicated I attended this class last weekend – with my wife.  It was her first class at MVT, but I will let her tell her own story.

The class runs as described in the curriculum description.  Aaron runs the class participants through the basics including the principals of marksmanship, zeroing procedures, tactical and speed magazine changes and stoppage drills on day 1.  Day 2 is focused on shooting positions, shooting on the move and some drills that begin to segue towards CTT.  The quality of instruction remains high and an impressive amount of material is covered in two days.  If your eyes are open during the course it is impossible not to recognize the progress each student has made at the completion of the class.

So here is the thing.  Part of my ego would love to claim that I knew it all or had it all down cold when I got there, but that’s just not the case.  The truth is, I had been exposed to some of the material over time but not all of it.  I had absorbed some of it along the way in earlier courses but not all of it.  For example, some things like the impact of optics height over bore on accuracy at short distance I had heard before but did not click until last Sunday.  Some things I had just not been exposed to before – like support side shooting.  Let alone had a chance to do enough of it to convince myself I could hit what I was aiming at using the techniques taught.  I suspect for most mortals, even those who have had previous training, there are things to be learned in CR.

The final training block and associated exercise introduces buddy team fire and movement.  My wife became my battle buddy in this drill.  As somebody who had come to prior classes by myself, for me this was also a learning moment.  Bluntly, it felt a bit more real with a family member in the game than it had in the past.

As my wife and I worked our way thru this exercise I tripped into a couple of other things to consider on the drive home and eventually share.  A final bound or two from our target, as I began my bound, my wife yelled “stoppage”.  Well trained, down I went intending to provide covering fire.  One round later I was yelling “stoppage” as well. There was not much thought to it, muscle memory I guess.  But that magazine change was likely the fastest I had ever managed.  My rifle was up in a flash and the exercise ended.  When I stood, I had one of those little moments where you know you did it right.  Clearly a small victory, but for me that moment was priceless.  It was done well enough that both my classmates and Aaron commented.  Aaron’s final comment to the class across the range was “I taught him that”.  Smiling ear to ear my simple response was – He did!

On the ride home I found myself considering Max’s prior statements that life can be defined in seconds and inches in certain circumstances.  Mostly pondering whether my magazine change would have been fast enough to make a difference.  No way to know the answer to that question, but I am going to keep working at it.

Max Adds: I think CG has outlined some issues perfectly:

1) The benefit of training that many people don’t know, or don’t think, they need. This has been the problem with the Combat Rifle class for the outset – without really knowing the content of it, many think thy are already better than it. Tip: we design these classes with a  purpose, and they will really help you. But yeah, I can run my rifle fine. Right? Right?

2) The vital matter of training with those you are likely to fight with. Like your family! Your family, band, tribe, whatever. We have many who come as individuals and small groups in order to take back the training to their group. Limited ‘train the trainer’ stuff – because these guys are on the whole not really trainers. That has merit, but how much better to receive the actual training at source? When you are down, and they are closing in on your family, your kids, don’t you want your wife to pick up her rifle and rain hell fire down upon them?

I mean, look at the photo at the top of this post for a momnet. That’s America right there. That’s suburbia gone live firing. Good job, because I want you people to survive. That’s why we at MVT do this.