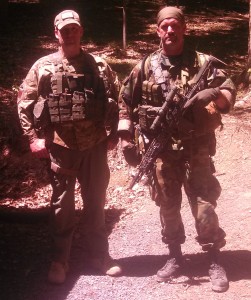 I’m just back at my computer after this past weekend’s Combat Patrol Class. On this class, night movement posed more of a challenge, specifically for the night reconnaissance patrol portion of the tactical exercise.

The background to this is that there was a starlit cloudless sky but no moon. This made it very dark, in particular under the canopy. Night time light conditions can vary from so bright the moon casts shadows and it feels like daytime, to where you can’t see your hand in front of your face. Because of the summer sunset times, the recce patrol started in daylight and transitioned into darkness. In general, the teams did very well and managed to traverse some difficult terrain in the darkness. I had given them permission to use the trails on the way back in case going was tough on the steep wooded terrain and visibility was very bad. Although not the most tactically sound practice, there is a convergence of tactics and safety, and the primary training objective was the conduct of a close target recce patrol at night. It was a compromise between safety and tactical considerations.

In this post I want to throw out some movement tips for nighttime, primarily focused on ‘old school’ considerations for when you don’t have modern night optic devices. I wrote a previous post titled ‘Considerations for Night Operations‘ which would prove a useful companion read to this one .

Note also that on the night optical device side, I have started a new class specifically for this: Night Optical Device Firing (NODF).

So in no particular order: 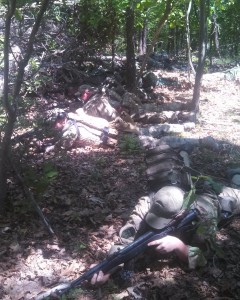 Above: Practicing breaking track and putting in a hasty ambush on the Patrol Class, as part of the occupation of the patrol base.

The primary take away is that patrol movement at night is outside the comfort zone of most people and needs to be trained and practiced.

I am putting a couple of classic British Army training videos in this post. It looks like they are from the 80’s. These are well worth your time: everything in these videos is valid, and it shows the preparation and conduct of a recce patrol. Usefully, they do have some older generation night vision and thermal gear, so you see a little of the use of old-school techniques, as well as technology.