The article below has been contributed by my father. He served for decades as an officer in the British Army Royal Corps of Signals (‘Royal Signals’). I was born in 1973 while he was serving in Northern Ireland. As a family we lived for many years in Germany while he served with BAOR (British Army of the Rhine). He also served with 216 Airborne Signals Squadron as part of 5 Airborne Brigade, or whatever it was designated in the 70’s. 5 AB Brigade became the current 16 Air Assault Brigade, within which 2 Battalions of The Parachute Regiment serve, the other Battalion nowadays serving with the relatively new SFSG (Special Forces Support Group).

The photo below is of my father sometime in the 1970’s testing a competition which, amazingly he began and still runs today. It is called the Lanyard Trophy  and takes place annually among Royal Signals units. The competition was and is 40lbs including weapon but excluding water and food over 40 miles in 24 hours. The aim of the training is to condition the soldiers body and mind to the fact that he can do it. Giving up is not an option. The Soviets had a way of dealing with prisoners! Competitively, times are 9/10/11 hours depending on terrain and conditions. It seems to be consistently won by teams from either 216 Airborne Signal Squadron or 264 SAS Signal Squadron. 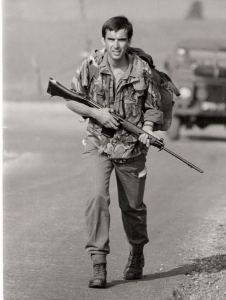 Here is the background:

In 1978 the World was a different place. In Europe the Iron Curtain had been in place since 1945 and the Berlin Wall since 1961. The US and Western Europe formed NATO. The Soviet Union and Eastern Europe responded with the Warsaw Pact. Both sides had thousands of nuclear weapons ranging from multi-warhead strategic missiles down to “tactical nuclear weapons” fired from heavy artillery.

After 1945 the West mainly disbanded its armies but relied upon its nuclear weapons as a deterrent to Soviet aggression. There was a “trip-wire” philosophy whereby any attack would be met with an immediate nuclear response. During the 70s it was felt that this plan lacked credibility so it was replaced with “graduated response”. Any aggression was deemed to be a “mistake”. Our response would be to initially meet the aggression with conventional forces to buy time. If the politicians were unable to resolve the situation then NATO would “go nuclear” after, for planning purposes, some seven days. In the 1st British Corps we guarded the “sites” where the tactical nuclear weapons were meant to be, although none of us knew whether the sites held anything or not, we practiced “out-loading” them and spent many a night trundling around West Germany in the dark, guarded by mechanized infantry, to set up Nuclear Ammunition Supply Points. Major exercises always included “nuclear release” practice by the heavy howitzers after which it was ENDEX and everyone “went home”. We all knew that if/when they were fired for real then it would be “the end” for the survivors of the “conventional phase”.

The Warsaw Pact was one huge military camp. Ordinary people lived like slaves so that a massive part of the GDP could be spent on the military. There was universal conscription. The secret police were everywhere, the East German STAZI, being particularly notorious, and the Gulag beckoned for dissenters.

The Warsaw Pact had a massive conventional superiority. Their first echelon of Russian and East German Armies, the Group of Soviet Forces Germany (GSFG), had the very best equipment and numbered tens of thousands of armored vehicles. They were formidable in every area; air defence, EW, Airborne, amphibious assault, and there was their “SAS” the Spetznaz. Our exercises always included the assumption that the Warsaw Pact had air superiority. It’s not surprising that some NATO members felt intimidated! The Danes, in particular, watched routine massive “live firing” Warsaw Pact exercises in the Baltic, on their doorstep, by truly impressive naval, amphibious and airborne forces.

It was decided to form a UK Mobile Force (UKMF) which could be rapidly deployed to the flanks of NATO, particularly Denmark and Italy, at “times of tension”. This was a political gesture of solidarity. The UKMF was a “light” brigade with a PARA Battalion forming the Lead PARA Battalion Battle Group (LPBG). Support Helicopters (SH), Chinook and Puma, would be in support. The plan was that the LPBG would go in by C130 with the balance getting there as quickly as was possible. The UKMF would “dig in” on arrival –and wait. It was clear that if anything happened “for real” that we would only last for a couple of hours.

It’s a good maxim that you should hope for the best but plan for the worst. If the worst happened then we needed a plan. Being a prisoner of the WP was unlikely to be softened by the Geneva Convention and the opportunity to form an escape committee! Stalin’s secret police had exterminated all the officers of the Polish Army in 1939/40 with a pistol shot in the back of the head; all 30,000 of them. Of the survivors of the German Army at Stalingrad, about 100,000, only 6000 returned to Germany alive. UN prisoners, captured by the North Koreans, 1950-53, had been treated brutally and had suffered the infamous “brain washing”.

We had no armored vehicles and our “soft” wheeled vehicles were very unlikely to survive. In any case, a war was likely to start the biggest traffic jam in history as tens of millions of people across Europe tried to flee. The WP boasted that they would be at the Rhine in 24 hours but the German Chancellor responded that only if they could get past the traffic jams. The reality would have been much, much worse with WP ground attack aircraft making the destruction of Iraqi forces fleeing Kuwait look like child’s play.

The simple plan was that we would all train to cover 40 miles on foot across country as fast as was possible but in not less than 24 hours. Armored forces need to stop to resupply with ammunition and POL, normally each night, and it was hoped that we could get ahead and break clean. Each man would carry a weapon (of course) and a load of 30lbs including ammo, water, a 24 hour ration pack  and his NBC kit. The training was an “individual event” because everyone had to learn that they held the key to their own survival. March or die!

In Denmark/Schleswig Holstein the prospects were bleak. We came under command 6 German Panzer Grenadier Division. There was going to be hard fighting. Forty miles would get you to the North Sea and then what? In Italy the prospects were better. The attack would be by “lower grade” WP formations, channeled by the Gorizia Gap between the Dolomites and the Aegean Sea. The break clean would be into the Dolomite Mountains where there was greater opportunity for escape.

As it happened, President Reagan and PM Thatcher did not blink. They deployed cruise missiles. The task of building defences against this unique threat broke the economy of the Soviet Union. Michael Gorbachev recognized this. He knew that it was all over. In December 1987, Mathias Rust landed his light plane in Red Square having successfully evaded, at low level, all the Soviet Air Defence systems. Gorbachev seized the opportunity to sack swathes of the Soviet High Command. In 1989 he declined to support the East Germans against their own people and the Berlin Wall fell. The rest is history…..

But what of the 40 mile march? In 1982 the Argentinians seized the Falklands. This was totally unexpected. Further, it was not going to be the armored war for which everyone had trained. There were only a handful of vehicles and most Chinook helicopters had been lost on the Atlantic Conveyor. Everyone was going to have to “TAB” from San Carlos to Port Stanley, a distance in excess of 40 miles. Nobody had trained for this…except those men from the UKMF.

The 40 mile march is still going today. No matter what the doctrine or the technology the fact is that, sooner or later, determined men will have to march or “TAB” a long way carrying a heavy load……

There is a tad of moisture in the corner of my eye. In 1978 I was 5 years old. In a sliding door parallel universe, the United Kingdom is a nuclear wasteland and my father is tabbing into the Dolomites, hoping to survive. Soviet forces are overrunning Western Europe. Survivors form the resistance, holed up in the mountains. Radioactive ash blows across the landscape.